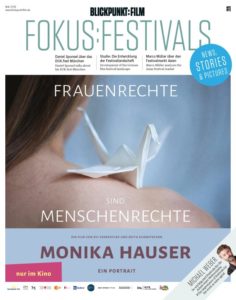 With its May 2018 issue, the German film trade magazine Blickpunkt:Film is launching a Quarterly, focusing on Film Festivals and thus following the growing importance of film festivals on the international film market. The special issue highlights the German film festival landscape, as well key international players. Background reports on strategic festival placements of current productions, on opportunities and hurdles for film makers in the associated markets and other industry offerings are featured, as well as current developments in the worldwide festival circuit. With results from applied science, it also presents market-relevant findings from the latest film festival research. 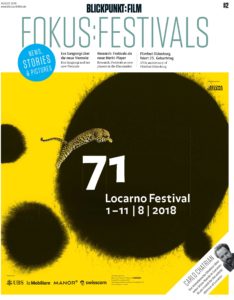 overview of the artistic position of the Locarno Festival and thus of Carlo Chatrian, the future artistic director of the Berlinale, and also provides comprehensive insight into the strategic development of the Swiss A-Festival over the past 20 years. Torsten Neumann offers an extensive look behind the scenes on the occasion of the 25th anniversary of the Oldenburg Film Festival, while Eva Sangiogri describes her vision for the future of the Viennale, as new artistic director. The 5 Faves by Mirsad Purivatra, which focus on the Sarajevo Film Festival with its long-standing partnerships and thus excellently illustrates the strategic perspective of the European Commission on film festivals, are also concerned with developments. Finally, the scientific contribution Film Festivals the new player in the market deals with the continuous transformation of numerous film festivals into highly diversified media companies. 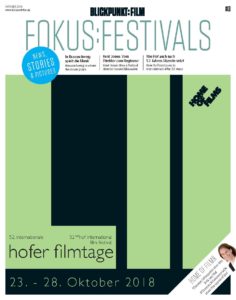 highlights the mission and gradual change of the International Hof Film Festival, one of the most traditional German film festivals under its new management. Kent Jones, the director of the New York Film Festival, offers a rare change of perspective with Diane, his directing debut, taking the side of director for the first time. The fact that film festivals often showcase artistic movements not just limited to film demonstrates the International Film Festival Braunschweig with its focus on music in the film of as well as the ongoing developments which can be seen also in the forthcoming issue of the 60th Nordic Film Days and the 61-year-old DOK Leipzig.